Review: The Atomic Weight of Secrets or the Arrival of the Mysterious Men In Black by Eden Unger Bowditch 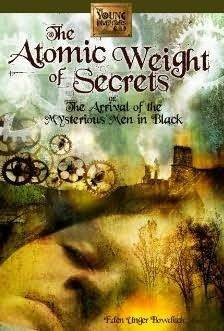 Title: the Atomic Weight of Secrets or the Arrival of the Mysterious Men In Black

Who Should Read It?
This is a great book for ages 12 or 13 and over. I think it might be a little too slow for those younger than that, but adults interested in YA (especially those that have ever been intrigued by a bit of science) will love it!

What I Have to Say:
i LOVED this book! I'm going to be honest - what attracted me to this book most in the beginning was the title. I liked how it was long and started off with "the Atomic Weight of Secrets." It sounded mathy to me, and I love math!

It starts when 5 exceptionally brilliant children are, seemingly without warning, separated from their brilliant, scientist parents, and brought to live together. When I started reading it, even though I immediately enjoyed it, it was initially hard for me to tell if it was really a book for me. It did start off a little bit slowly, and there was something about the men in black with their odd outfits and even odder hats that didn't sit right with me. It almost felt, well, pointless. And even after finishing the book, I'm still not sure I understand.

By the end, though, that didn't matter, and I actually began to enjoy the author's creativity in describing these elusive "men in black." The character's were all extremely wonderfully developed and enjoyable - you could tell, by the time the author put into giving back story and helping us to know everything there was to know about each of the five children, that she really loved these children. As such, I also grew not only to know them, but to love them.

All five of the children are brilliant scientists, just like their parents, but the fact that they are also children and, thus, childish, makes them incredibly endearing. It's impossible not to find yourself completely drawn in as these children fight and work to understand each other, the men in black, and why their parents would just allow them to be abandoned like that. As they learn to work together to try to "save" their parents, their five separate stories begin to meld together in a beautiful way.

Though the book did feel slow at times, for the most part it was just action-packed and exciting; absolutely perfect for the train on which I was reading it!

I would definitely recommend it to those interested in YA! And I know I'll definitely be reading the second book in the series, if only to find out more about what is up with these men in black and their funny goggles or black bunny ears!


Summary:In 1903, five truly brilliant young inventors, the children of the world’s most important scientists, went about their lives and their work as they always had.

But all that changed the day the men in black arrived.

They arrived to take twelve-year-old Jasper Modest and his six-year-old sister, Lucy—he with his remarkable creations and she with her perfect memory—from their London, England home to a place across the ocean they’d never seen before.

They arrived to take nine-year-old Wallace Banneker, last in a long line of Africa-descended scientists, from his chemistry, his father, and his New York home to a life he’d never imagined.

Twelve-year-old Noah Canto-Sagas, already missing his world-famous and beloved mother, was taken from Toronto, Canada, carrying only his clothes, his violin, and his remarkable mind.

And thirteen-year-old Faye Vigyanveta, the genius daughter of India’s wealthiest and most accomplished scientists, was removed by force from her life of luxury.

From all across the world, they’ve been taken to mysterious Sole Manner Farm, and a beautiful but isolated schoolhouse in Dayton, Ohio, without a word from their parents as to why. Not even the wonderful schoolteacher they find there, Miss Brett, can explain it. She can give them love and care, but she can’t give them answers.

Things only get stranger from there. What is the book with no pages Jasper and Lucy find in their mother’s underwear drawer, and why do the men in black want it so badly?

How is it all the children have been taught the same bizarre poem—and yet no other rhymes or stories their entire lives?

And why haven’t their parents tried to contact them?

Whatever the reasons, to brash, impetuous Faye, the situation is clear: They and their parents have been kidnapped by these terrible men in black, and the only way they’re going to escape and rescue their parents is by completing the invention they didn’t even know they were all working on—an invention that will change the world forever.

But what if the men in black aren’t trying to harm the children? What if they’re trying to protect them?

And if they’re trying to protect them—from what?

An amazing story about the wonders of science and the still greater wonders of friendship, The Atomic Weight of Secrets or The Mysterious Men in Black , the first book of the Young Inventors Guild trilogy, is a truly original novel. Young readers will forever treasure Eden Unger Bowditch’s funny, inventive, poignant, and wonderfully fun fiction debut.

Cover Story: I hadn't seen the cover before reading the book (or if I had, I don't remember it), but looking at it after the fact, it would certainly inspire me to read the book. It's intriguing! Unfortunately, I think it's also a little bit more adult than the book itself. Other than that, great cover, which I'm planning on taking a little more time to examine in a minute!
Posted by brizmus at 12:47 PM
Email ThisBlogThis!Share to TwitterShare to FacebookShare to Pinterest
Labels: 4 stars, net galley

Great title, it caught my eye at once

Great review. I don't think I've seen much about this one :)

My new side kick on my blog is a math fanatic too. LOL I unfortunately suck at it.

I started reading this, but put it down and never did pick it back up again. Great review - I know now to keep plowing through the slow parts!

I'm not much for math or science so the scientific sounding title would normally turn me off, but your review definitely intrigues me. And the cover is really cool.

I love science and have this one on my Kindle, great review...can't wait to dive in!

Hi! Eden Unger Bowditch let me now about your review and I agree, I loved this book! I'm also very intrigued about the men in black, and I can't wait to learn more about them! Eden Unger Bowditch was kind enough to do an interview over on my blog, and I would love it if you could check it out! Awesome review!