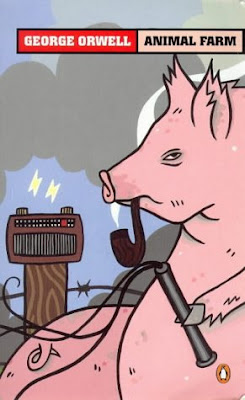 Who Should Read It? EVERYONE! Seriously! It's witty and funny and brilliantly constructed. More than that, though, it's informative!

What I Have to Say:
Frankly, this book is frightening. And frighteningly awesome. I have vague memories of having read it way back when I was in junior high, but reading it again recently, I had no memories of the actual book itself, so this time around was basically like reading it the first time around. And boy am I glad I did decide to reread it.

So, it starts of seeming like, what is to me, a dream come true. The animals of Manor Farm decide to kick the human off the farm. I've always dreamed about something like this happening somewhere, to show humans that animals really do have feelings and the way we torture them on factory farms, raising them for food, is sickening. Unfortunately, from there it goes downhill (in terms of my dream of what would happen if this actually did happen in life), and what follows is a brilliantly master-minded story that gives us a unique look at the inner-workings of a socialist/communist society.

Sure, with the animals and all, it's fictional, but it's based on truth so much so that, were you to replace the animals with human animals, you would have communist Russia. Orwell's story is told in such a way that, even though you are reading something serious and important, you are absolutely hooked from line one, and you won't want to put it down until you know what happens to the animals of Manor/Animal Farm. Even though, if you know a little something about communism, you probably do.

I think it was absolutely fitting that Orwell used the guise of "pig" for the rulers of his farm. And the sheep, of course, were always the ones to blindly follow. It is scathingly critical in the funniest and most appropriate of ways. Despite the good intentions with which the farm is formed, we see how easily these intentions can change, and how readily the people in charge are willing to brainwash those "less intelligent" in order to gain a little more human comfort. It builds up in such a way, though, that it's almost as if those high up don't even realize what is happening.

Animal Farm is satire at its best, and I could go on for ages about how brilliantly Orwell has parodied communism and given all the best reasons it won't work, but the fact is, the book is short and wonderful, so I think it's best for you to just read it for yourself. So do it! Now! :-)

Summary: Having got rid of their human master, the animals of Manor Farm look forward to a life of freedom and plenty. But as a clever, ruthless elite among them takes control, the other animals find themselves hopelessly ensnared in the old ways. Orwell's chilling story of the betrayal of idealism through tyranny and corruption, is as fresh and relevant today as when it was first published in 1945.

Cover Story: There are a bagazillion different covers to this book, but I'm particularly partial to the cover of the one I recently read, which can be seen at the top. I love the creepy pig with the barbed wire and the pipe!
Posted by brizmus at 8:30 AM
Email ThisBlogThis!Share to TwitterShare to FacebookShare to Pinterest
Labels: 5 stars

I LOVE this book.
I love that he had me basically ready to scream by the end.
Great review.

What can I say, it is a classic, and a classic I have not read

I agree - everyone should read this book.

I also agree this is a book which should be read by everybody. But not only this book. I strongly recommend you two other books written by Orwell:
- 1984, excellent book about the same of Animal Farm. This book is really a classic and some expressions from it are used in ordinary language (for example: "the Big Brother").
- Homage to Catalonia, this book shows how the young Orwell discovered the actual face of communism during the Spanish Civil War

I've been wanting to read this one forever. So glad it'll be worth it once I get to it. Thanks for the excellent review!

The last and only time I've read this was for english in high school but I definately want to read it again someday since its a classic.

Very few books have had as much an impact on me as this book has. I first read it the summer of my 8th grade year, and it was an awaking to the psychology of manipulation and passive oppression that we are all susceptible to. The brilliance of this book is in its simplicity in how it shows the basic elements of human nature: that being our almost unavoidable lock-step march towards our own demise.