I've done a Tuesday meme twice, and both times I've done it on Wednesday.
So I figure I've got to start a Wednesday Meme to help me do Tuesday's on Tuesday. And I've picked Waiting on Wednesday, hosted by Breaking the Spine.

Basically, I pick a book I'm excited about. Ya'll already know that I'm mega excited about "Odd and the Frost Giants" from my I'm So Excited!!!! post. I recently discovered that it's already out in the states. HURRY UP AND COME OUT HERE!!!! 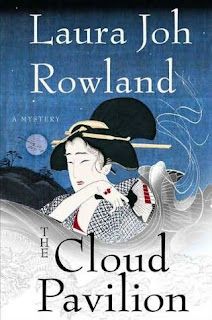 Another book I am super excited about, though, is "the Cloud Pavillion" by Laura Joh Rowland.
For those of you that don't know, she writes mysteries that take place in Japan, and they are awesome! Of course I would say that, though, because they take place in Japan. You'll just have to check it out for yourself.

Japan, 1701. A woman is brutally attacked within a bamboo prison as clouds swirl around her head. Meanwhile, at Edo Castle, samurai detective turned chamberlain Sano Ichiro is suspicious of his old rival, Yanagisawa, who has been oddly cooperative since returning from exile.

But just as Yanagisawa’s true motives begin to emerge, Sano’s estranged uncle comes to him for help: His daughter has disappeared, and he begs Sano and his wife—who once suffered through the kidnapping of their own son—to find her before it is too late.

Posted by brizmus at 12:02 PM
Email ThisBlogThis!Share to TwitterShare to FacebookShare to Pinterest
Labels: WoW

Welcome to Waiting on Wednesday. Your pick sounds very interesting, thanks for sharing.

I haven't read a book on old Japan in a long time! And a mystery too! This sounds interesting. I see all her older books are on Kindle. That's a plus for me.

HI! Moody here, Thanks for commenting on my blog! And for subscribing!
To get my blog a bit more viewed I contacted a bunch of blogs which were saying they would advertise other book blogs. Step 2, I commented a lot on websites like Simon Pulse, bookstore websites and stuff like that. And finally asked authors to please send me their books to review. Some will have faith in your blog and say yes, but others might refuse. It's hard but the rewards are great. Although you should make sure they send internationally. If you don't already have one you should create a policy for authors, publicists and bloggers so they know your rules and regulations. But the thing that will help out the most is link exchanging, comment on other people's blog asking for a link exchange and they might say yes. And if you can try and sneak in a button exchange to!
Now I have a question for you, what website did you see my blog on?
Bonne chance!
-The moody teenager

I'd love if you posted some French covers!! Do!!

I have an award for you!