Now that my friends are gone and Book Blogger Appreciation Week is over, I can get to trying to catch up on some reviews. And the first one of these catch up reviews will go, unfortunately, to a book that I didn't love. ::sadness:: I always feel so bad about not liking a book. I mean, that author worked HARD on that book (most likely) - whom am I to not like it or to judge? That, of course, doesn't stop me from judging. So now you have it, my very first one star review, which is more like a rant. 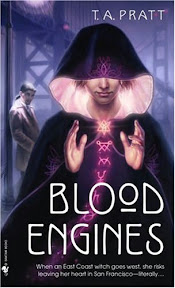 Who Should Read It?I really didn't like it, so this is hard for me to say. Read how I felt about it and the summary (if you please) and decide for yourself.

What I Have to Say:Oh man, I REALLY did not like this book. First of all, it took me FOREVER to read. I had it on my kindle, and I went on vacation, and I think subconsiously I forgot to bring my charger with me so that my kindle would die so that I wouldn't have to finish it while enjoying myself. Then I got back and went to spend the weekend at my boyfriend's parents house, and of course I FORGOT my kindle. Again, I am sure it was more subconsciously on purpose than accidental. I was determined to finish, but I could at least do it when I wasn't supposed to be enjoying myself.
That said, the story is about a witch, Marla Mason, who is THE most annoying main character of all time. She is egotistical and uncaring about everyone and everything around her. Which therefore makes it hard to believe that she is actually as obsessed and in love as the book claims with her drug-ridden, rodent-infested polluted human-waste smelling city. And nature - her city has none, so obviously she scorns it. But the fact that she is makes her even more annoying, because everything she does is either for it or for her, no matter whom she hurts along the way. I feel like I would have wanted to slap her, but really, I disliked her so much that I couldn't bring myself to care.
Once we understand who she is and what she cares about (herself and her city), the rest of the book is 100% predictable. There is no character development whatsoever (not just with her but with any of the characters), the plot development isn't really development, instead just moving along as it is forced to so that the book can have an end. And the only shockers are the weird S&M party and sex scenes. Which were totally uninteresting but slightly disturbing and tried to develop Marla as a character but basically failed. I really would rather have skipped them.
All this, and I still haven't mentioned that it's supposed to be an urban fantasy. And Marla's supposed to be a witch. But I guess the fact that her magic is connected to her city basically allows her to not have to use it. The paranormal in this book is severely lacking, especially when it comes to Marla.
Some of the scenes are just so ludicrous that I had to step back and wonder if it is really possible that there are people that would do such things (as Marla, the good guy in this book) - and then cross my fingers and hope that no, there are not.
And if I continue my rants, which I definitely could, I will give away the whole book. And there are potentially still people out there wanting to read it.

Summary (from marlamason.net - mygod, do people really like her THAT much?!?):In Blood Engines (10/07), sorcerer Marla Mason, guardian of the city of Felport, has a big problem. A rival is preparing a powerful spell that could end Marla's life -- and, even worse, wreck her city. Marla's only chance at survival is to boost her powers with the Cornerstone, a magical artifact hidden somewhere across the country in San Francisco. But when she arrives in the pretty white city by the bay, she finds the quest isn't quite as simple as she'd expected... and that some of the people she'd counted on for help are dead. It seems that San Francisco's top sorcerers are having troubles of their own -- a mysterious assailant has the city's magical underworld in a panic, and the local talent is being (gruesomely) picked off one by one. With her moderately faithful sidekick Rondeau in tow, Marla is soon racing against time through San Francisco's unknown streets, dodging poisonous frogs, murderous hummingbirds, cannibals, and an increasingly hostile reception from the locals, who suspect Marla herself may be the source of the recent murders. If Marla doesn't figure out who's killing the city's finest in time, she'll be in danger of becoming a magical statistic herself...
Posted by brizmus at 5:02 AM
Email ThisBlogThis!Share to TwitterShare to FacebookShare to Pinterest
Labels: 1 star