Reviews: the Graveminder by Melissa Marr 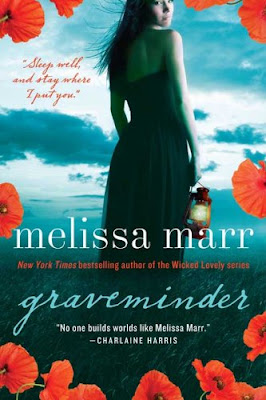 Who Should Read It?
The blurb about this book said "for fans of Charlaine Harris, Joe Hill, Sherrilyn Kenyon, Neil Gaiman, and Carol Goodman." I've never heard of Joe Hill, Sherrilyn Kenyon, or Carol Goodman, I've read one Charlaine Harris, and I didn't like it, and I ADORE Neil Gaiman. For me, I would say this is an adult book for adults that like YA. If you like a little mystery/suspense along with a little bit of undead and some harsh realism, this book could be for you.

What I Have to Say:
I'm happy and surprised to say that I thoroughly enjoyed this book. I say surprised because I almost didn't read it - I'd read Wicked Lovely and Ink Exchange, and I didn't really like either of them all that much, so I sort-of thought that meant I wasn't a Melissa Marr fan. And then, much to the horror of many book bloggers I know, I'm not a fan of zombies. At all. And this book seemed to be a book about zombies trying to disguise itself as something else.

In Graveminder, Melissa Marr has taken the perfectly normal world in which we live and added something totally bizarre. And she has done this in such a way that the reader almost believes that maybe Claysville, the home of said bizarreness, exists somewhere in the world, and we just don't know it. What I liked most about this book, though, was Rebekkah. She is an utterly believable main character put into utterly real situations with utterly real feelings. She reminded me of myself a little bit, and as such I felt a very close connection to her. Even though there was the occasional zombie involved, I really understood what she was going through and could relate to her feelings. No one will have been through EXACTLY what Rebecca is going through, but I think most readers will find themselves able to relate to her on some level.

Relationships are scary, and the world is huge place just waiting to be explored. Melissa Marr deals fabulously with these facts of life and the emotions associated with them.

I'll admit that I probably would have enjoyed the book more if the what hadn't been zombies (it's okay, that's not a spoiler), but then I think there are some that will find that the zombies make the book. They're done well and far from over the top, so, as zombies go, these rate up there, but zombies just aren't really my thing. Also, there were quite a few things that I found to be lacking in explanation. I almost think Marr did that on purpose, but I still found it frustrating and wish she would have tied up the loose ends before it was all over.

All in all though, a good book!

Summary:Melissa Mar is known to young adult readers as the author of the popular faery series Wicked Lovely. Her debut leap into adult fiction lands her in the small community of Claysville, a town where the dead walk free unless their graves are not properly tended. Into this eerie maelstrom, Rebekkah Barrow descends as she returns to a place that she once believed she knew. Kelley Armstrong justly described Graveminder as "a deliciously creepy tale that is as skillfully wrought as it is spellbindingly imagined." A new genre author to watch.

Cover Story:I love this cover. The colors are really pretty, and something about the way they're all put together with the girl holding the lantern just seems creepy in a beautifully mystical kind of way.

Disclaimer: This book was sent to me for review by William Morrow Publishing. This in no way affected my review.
Posted by brizmus at 6:56 PM
Email ThisBlogThis!Share to TwitterShare to FacebookShare to Pinterest
Labels: 4 stars

I have to say that I didn't much care for Marr's 'Wicked Lovely' series. So I was a little wary of Graveminder. Luckily for me, I thought this tale was more successful than her YA series.

this is a really good review about the book makes me wanna get it and read it at home thanks for your awesome revew ,E-Book for your blogging experience