There are several Bernard Cornwell fans in my life. So when Danielle at Harper Collins agreed to send me an advance copy of his latest novel (out January 17, 2013), I was psyched for the opportunity to share it with some of those people. After my brother read it, his friend Franklin read it, and I'm thrilled today to present you with Franklin's review. Enjoy! 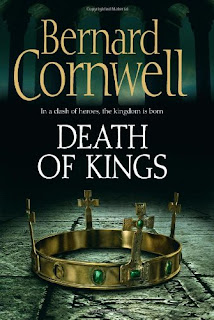 Who should read it? Anyone interested in English history, not just the main events that are known by all throughout the world, but the history of how people lived, how they survived and the environment in which they lived. Certainly anyone that is a fan of Bernard Cornwell and the intriguing characters that narrate his novels should read this book.

What I (Franklin!) have to say:
This is the eagerly anticipated sixth installment in Bernard Cornwell’s series, The Saxon Tales. The series is centered on Uhtred of Babbenburg, the narrator, who not only witnesses the events that took place in 9th century England, but participates in the events with and on behalf of Alfred the Great. There is one thing about history, what has happened in the past cannot be changed. Therefore, as the title implies, Uhtred witnesses the death of Alfred the Great in 899 AD, and then worries for the future of Wessex and England as a whole since the Danes (Vikings) have been trying to conquer Wessex and kill Alfred the Great for many years.

Uhtred has several conflicts in which he contends and some that he resolves. He wants to return to his home of Babbenburg, he wants to do his duty to the king that he has sworn an oath (Alfred), and he contends with the prospect of swearing an oath to Alfred’s son Edward. Furthermore, the reader will get a glimpse of one of the greatest female leaders in history, who just happens to be Alfred’s daughter, Aethelfled. In 890 AD England is becoming more Christian. Uhtred has to contend with Christian’s over his worship of Thor even though Alfred tries for years to convert Uhtred to Christianity.

Like the prior books in The Saxon Tales Bernard Cornwell does a wonderful job of describing life as it occurred in 9th century England. It is hard for us to imagine a world or life without large buildings, automobiles, and air travel. In the Death of Kings, Mr. Cornwell brings to life a world without plumbing and electricity. Furthermore, the reader experiences the horrible and personal way in which battle was executed in 890 AD, the shield wall.

The Death of Kings is easy to read, and when the reader is finished he will be clamoring for more!

Summary: The fate of a young nation rests in the hands of a reluctant warrior in the thrilling sixth volume of the New York Times bestselling Saxon Tales series. Following the intrigue and action of The Burning Land and Sword Song, this latest chapter in Bernard Cornwell’s epic saga of England is a gripping tale of divided loyalties and mounting chaos. At a crucial moment in time, as Alfred the Great lays dying, the fate of all—Angles, Saxons, and Vikings alike—hangs desperately in the balance. For all fans of classic Cornwell adventures, such as Agincourt and Stonehenge, and for readers of William Dietrich’s Hadrian’s Wall or Robert E. Howard’s Bran Mak Morn, the stunning Death of Kings will prove once again why the Wall Street Journal calls Bernard Cornwell “the most prolific and successful historical novelist in the world today.”

Cover Story: Simply stated – the crown without a king!

And there you have it - thanks so much, Franklin!
Posted by brizmus at 2:27 AM
Email ThisBlogThis!Share to TwitterShare to FacebookShare to Pinterest
Labels: 5 stars, guest review, historical fiction