Title: A College of Magics

Who Should Read It? Lovers of cutesy fantasy! 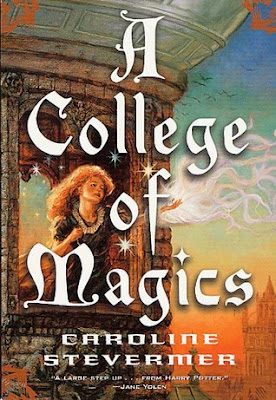 What I Have to Say:
I liked this book. It was a super cute, super fast read involving everything from English tea to huge rifts in the balance of the world.

That said, let's start with the things I didn't like so much. While the characters very obviously developed throughout the course of the story, it was really hard to actually see that development happening, and I found myself wondering if they were actually like that all along, and I just didn't see it at the beginning. One characters in particular, Jane, changed so much that I actually started to dislike her, when she was supposed to be one of the ones I was rooting for. And if Farris, the main character, actually matured, I had trouble seeing it.

Then I also found it really difficult to imagine where the story was taking place. There just wasn't enough information for my imagination to go into overdrive, and my overactive imagination is one of the reasons I love fantasy so much.

Lastly, the entire story felt somewhat emotionally detached. Death, for example, didn't seem to exact any emotion at all. Since the emotion was lacking within the story, it was also hard for me to get emotionally involved.

Despite all of this, I really enjoyed the book. I liked the subtle way in which the students at Greenlaw learned magic without ever actually being able to learn it hands on. I liked the way the good guys slowly separated themselves from the bad guys. I liked the dreamlike qualities of the plot and the way new plot lines just sort of presented themselves with no real explanation but were just understood (I didn't like, though, how some of them, including the most important, the functions of the wardens of the world) never got explained. I liked the way it progressed smoothly and easily, thus making it a book that I ultimately enjoyed despite all the problems I had with it.

So would I recommend it whole-heartedly? Probably not? But if you've got a little bit of free time and are looking for a quick, fun, cutesy fantasy, I say go for it! I'll be reading the second one only if I find myself in that situation.

Summary:Teenager Faris Nallaneen is the heir to the small northern dukedom of Galazon. Too young still to claim her title, her despotic Uncle Brinker has ruled in her place. Now he demands she be sent to Greenlaw College. For her benefit he insists. To keep me out of the way, more like it!

But Greenlaw is not just any school-as Faris and her new best friend Jane discover. At Greenlaw students major in . . . magic.

But it's not all fun and games. When Faris makes an enemy of classmate Menary of Aravill, life could get downright . . . deadly.

Posted by brizmus at 1:30 PM
Email ThisBlogThis!Share to TwitterShare to FacebookShare to Pinterest
Labels: 3 stars, caroline stevermeyer, college of magics, YA, ya fantasy